If you’re a fan of the game, donning your team’s kit is the best way to show your support. Through the years the Australian ODI team have had some truly excellent uniforms to match some truly spectacular performances. Below, we take a journey back in time to revisit some of the biggest moments from the Australian cricket team and the kits they were wearing at the time. These kits have been immortalised on the world stage because of the legends that wore them and to this day cricket fans across the world know what green and gold means on the cricket field – bring your A game!

The ’90s saw the Australian team rock some of the most classic ODI kits to date with the ‘95-96 kit being one of the standouts. Having a half green and half yellow design with four striking lines, it sports one of the biggest Southern Cross’ of all ODI uniforms to date. This kit has been immortalised because it was worn by Michael Bevan when he famously smashed a four to win the game against the West Indies on the last ball of his career at the SCG in 1996.

The 1999 World Cup was one of the biggest moments in Australian cricketing history with Australia beating Pakistan by eight wickets, paving the way for three straight World Cup wins. To match this legendary moment, the Australian team wore an equally as legendary kit with bright yellow and bold green. They also continued to implore the iconic Southern Cross, a symbol all Aussies know and love because it stands for freedom and loyalty. 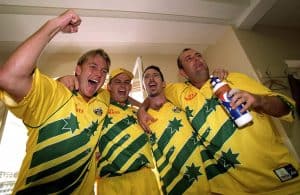 Continuing their jaw-dropping winning streak on the world stage, the 2003 Australian team wore one of their most iconic kits to date. This year they hit the right balance between bold green and Australian gold. Again the Southern Cross was a key feature of the kit that was paired with green streaks making the stars look as if they were flying – much like the balls that same off Ricky Ponting’s bat throughout the tournament. Cricket fans will remember him smashing the Indian side to bring the cup home for the Aussies, hitting 140 not out which earned him player of the match. 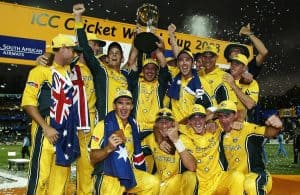 Three was the magic number for the Australian team in 2007, landing their third straight World Cup win, this time against Sri Lanka which made it their fourth World Cup win all up. The hero of the game was again, the legend himself, Ricky Ponting, who was draped in a mostly-gold kit with a dapper set of green stripes across the centre reading, AUSTRALIA, in the middle. Fans who scored this kit wear it with pride in remembrance of our nation’s elite cricketing potential. 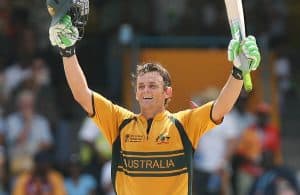 The 2015 World Cup was another highlight for the Australian side. Beating out all teams on our home turf to win the tournament never felt so good, or looked so good. The return of the cup to its rightful home also saw the return of the Southern Cross on the jersey, this time coloured in green and swimming in a sea of gold. Lucky fans who snapped up this kit can forever relive the moment the Aussies snatched the cup away from the Kiwi’s – what a game! 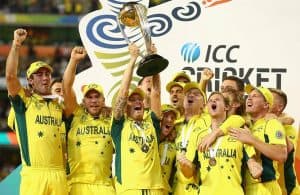 Show your support for the Aussies and relive their proudest moments on the world stage with your very own replica Cricket Australia merchandise available at Meulemans today!